ronaldweinland.info Magazines THE BOOK OF SOULS

THE BOOK OF SOULS

How does this singularity exist in such a chaotic and complex dimension? Allow the British heavy metal titans 92 minutes of your time.

Iron Maiden: how we made The Book Of Souls

The Book of Souls is the first double album of Iron Maiden's four-decade career. The fact that Maiden were so creatively inspired that they'd craft a work longer than most romantic comedies is enough to bring a tear to any fan's eye, but the quality of the album itself will make you weep with joy. The song is simply grand, beginning with a thick synth drone and regal horns preluding the entrance of Dickinson's golden voice.

Bruce's ability to tell a story through song remains unmatched, as does Maiden's instrumental section when moving a track's spirit forward with leviathan stomps.

The Book of Souls – Rolling Stone

But Maiden is a different beast now, and conceptual magnificence takes priority over instant gratification in Written by Steve Harris , the legendary bassist manages to coat the listener's ears with one of Iron Maiden's richest soundscapes to date, sweetened by the breathtaking use of keyboards.

As an example, I didn't even notice the synthesizers backing up the verses of "The Great Unknown", but once I did, it added to the fullness of the sound and now I can't unhear them. In that sense, the production actually adds longevity to the songs as there's more to discover.

My main complaint in my first attempt at a review was that there was nothing new under the sun. In most songs you can hear echoes of earlier material, sometimes to the point of feeling like they plagiarized themselves the worst offender being the introductory guitar melody of "Shadows of the Valley" - it hews very, very close to the opening of "Wasted Years". Listening to "The Red and the Black", the only song penned solely by Steve Harris, I thought the opening riffs sounded like they came straight from Killers, the chugging riff before the verse made me sing the lines of "Quest for Fire", and the vocal lines reminded me of "Rime of the Ancient Mariner".

Yet, right now, "The Red and the Black" has sailed up as a favorite! Somewhere along the line, I went from frowning disapprovingly at what I heard, to singing along and feeling a genuine rush of love for the band. 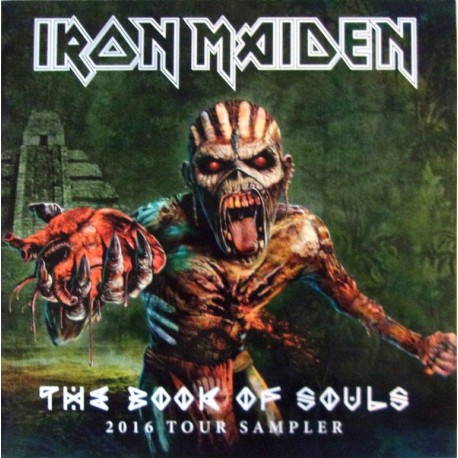 It's a hymn, all right, and I'm pretty sure it will slot in nicely on the band's setlist. It's long, yes; the second longest track on offer, in fact, but even as it is brimming with callbacks to older material, it has grown into a song I really enjoy listening to. I've complained loudly about their long songs on the last four or five albums being too stretched out, with too little variation, but on this album I feel the long tracks are sufficiently varied to maintain interest.

The last half of "The Red and the Black" has many different parts, often supported by synthesizers, including one especially memory guitar harmony that is as classic Iron Maiden as it gets without being a direct rip-off of earlier material; it's a part that is reminiscent of a part in Opeth's "In Mist she was Standing" Orchid, , a simple but effective melody that gives me the feels all over, in the same way their guitar harmonies did on the first seven albums the part starts at I do wish they had more of these parts spread across the two discs, but I'm pretty happy with this one.

It reminds me of all those guitar harmony parts from their older days that I cherish, like, for example, the part that begins at in "The Duellists".

While a song like "The Red and the Black" can be considered a "safe" song in the sense that it is Iron Maiden through and through, the band does actually sound genuinely fresh elsewhere - something I failed to hear because I was so hanged up on the tempo of the songs.

I wanted some kick-ass flurry of galloping Maiden, and a song like "If Eternity Should Fail", which kicks off the album, is building up rather slowly, turning into a great tune with some solid hooks that you may have missed on the first spin.

The energy is kicked up a notch in shorter bursts like "When the River Runs Deep" and "Death or Glory", with hard-rocking riffs. I prefer Maiden when they lean closer to metal which is why "2 Minutes to Midnight" is my least favorite Powerslave track.

Iron Maiden’s ‘The Book of Souls': One Year Later